Superstorm Sandy caused severe damage to 11 of our underwater tunnels, including the Rutgers Tunnel, which F trains use to cross the East River between Manhattan and Brooklyn. We've made temporary fixes since 2012, but now we need to rehabilitate the entire tunnel and fortify it for the future.

The Rutgers Tunnel is made up of two "tubes," each of which carries the train under the East River between the East Broadway station in Manhattan and the York St station in Brooklyn. The Rutgers Tunnel is one of 11 that were substantially damaged by Superstorm Sandy, and the last one that we need to rehabilitate. In addition to fixing the infrastructure and equipment that were damaged, we'll also fix and fortify multiple systems within the tunnel, as well as install end-to-end mobile phone infrastructure to allow for cellular service.

This kind of work is time- and labor-intensive, but we're phasing the project to minimize the impact to our riders, and we're providing as much alternative service as possible so you can get around during the work.

The project began with three weeks of work in September, requiring service changes on the and lines every night and all weekend during those three weeks. We also completed work in October and November, and will perform more work from November 30 to December 7. Then, beginning January 1, 2021, there will be three months of continuous work that will require similar service changes.

Here's everything you need to know about what we're doing, and about the best ways for you to get where you need to be while we work.

Our work to fix the Rutgers tunnel and its infrastructure will help make transit more reliable, resilient and accessible, for years to come. The improvements we're making range from protections against future extreme weather events to ADA and circulation enhancements to the East Broadway station. We're also installing and activating wireless cell service throughout the Rutgers tunnel so that you can continue using your phone uninterrupted as you travel through the East River.

Check out our progress so far!

Project Schedule and Impacts to E and F Service

While we’re doing this work, we’ll need access to the tunnel and its track. That means we can't run train service through the tunnel while we're working. On nights and weekends for three weeks beginning September 14 and one week each in October, November, and December, on nights and weekends for four months in early 2021, there will be no train service at the East Broadway or York St stations. To provide as much subway service as possible, we’ll reroute and trains in Queens, Manhattan, and Brooklyn.

We'll reroute and trains nights and weekends during:

We also worked for four weeks in September and October:

How E and F service will operate while we work

For the most up-to-date service information, use the MYmta app. If you have questions or need help, reach out to us @nyctsubway on Twitter or call 511. 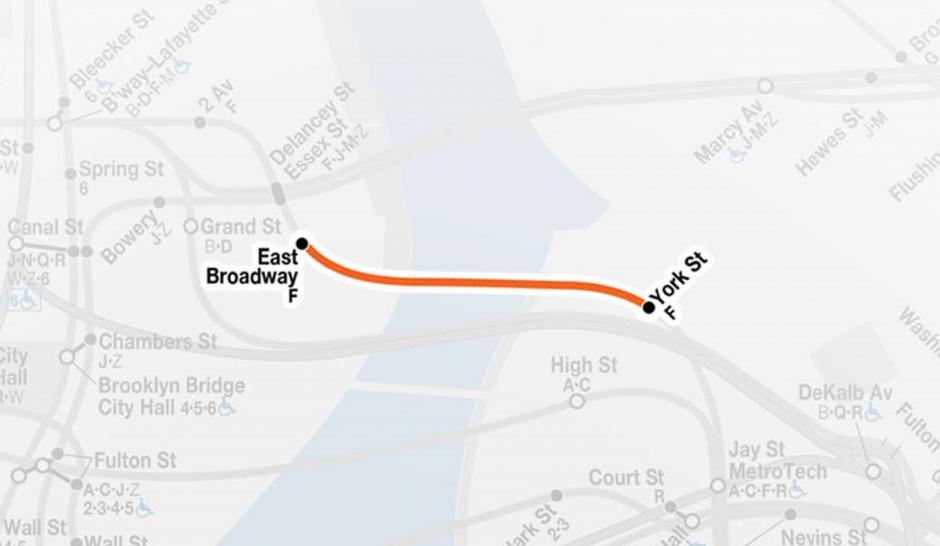