The MTA, Amtrak and NJ TRANSIT (NJT) have unveiled new reconstruction options for transforming Penn Station into a world-class, 21st-century transportation hub, as part of the Empire Station Complex.

Penn Station is the busiest rail transportation facility in the nation, serving 600,000 passengers daily prior to the pandemic. It is a critical facility for sustaining rail service and connecting people to jobs throughout the Northeast region, but it is outdated, overcrowded, unpleasant and functions poorly. It also needs to be expanded and reconfigured to accommodate the long-awaited Hudson Tunnel and Gateway programs that will allow the railroads to greatly increase the number of trains and passengers using the station.

The MTA, Amtrak, and NJT have developed two approaches for the Penn Reconstruction that will work to unify the separate railroads’ concourses into one state-of-the-art, open, light-filled space. This work re-envisioning the existing Penn Station was completed over the past year by the three railroads, supported by FXCollaborative and WSP. A separate but related planning effort is also underway for the Penn Expansion.

The Master Plan for Penn Station will create an interconnected, welcoming, and modern station worthy of New York. The iconic, re-imagined station, in combination with Penn Expansion, will accommodate the future volume of riders who are projected to use Penn Station.

The first approach leverages the existing configuration, retaining the two existing boarding levels while improving the station’s layout. This approach expands public circulation areas on both levels, with a two- and three-story central atrium and a circulation area at the east end of the lower level with more circulation space than the Great Hall at GCT.

New entrances would be added at 31st and 33rd Streets at the former taxiway between Madison Square Garden and 2 Penn Plaza. (The taxiway has been closed for security reasons since Sept. 11, 2001.) Some of Amtrak’s space on both levels would be repurposed for NJT’s commuters and operations. Ceiling heights would be increased in portions of the station, but would remain low in much of the lower level.

This alternative could be combined with a grand new entrance on Eighth Avenue, and a light-filled West Train Hall, again with a circulation area larger than the GCT Great Hall, built in the space currently occupied by Madison Square Garden’s 5,600-seat Hulu Theater. We would first need to purchase the theater from MSG.

This approach transforms Penn Station into an open, single concourse level. It eliminates all low ceiling heights and radically simplifies entry and exit routes between trains and the street. It also creates new circulation areas larger than the Great Hall of Grand Central Terminal at both the east and west ends of the station and removes portions of the upper level above the public circulation so that all public concourses would be two or three stories high. This would create a more open, airy feel throughout the station with better sightlines and more direct access to station entrances/exits. The remaining portions of the upper level would be used exclusively for non-public station operations.

The station could also feature a spacious, light-filled, mid-block Train Hall with prominent new entrances on 33rd and 31st Streets near Seventh Avenue. The hall would bring in natural light through a 2-block-long skylight over a new multi-story atrium built in the former taxiway. This would move MSG loading off 33rd Street to an underground loading area, creating a shared street with pedestrian priority, dramatically improving the streetscape.

The single-level alternative could also be combined with a grand new entrance on Eighth Avenue and the light-filled West Train Hall built in the space currently occupied by Madison Square Garden’s 5,600-seat Hulu Theater. We would first need to purchase the theater from MSG. 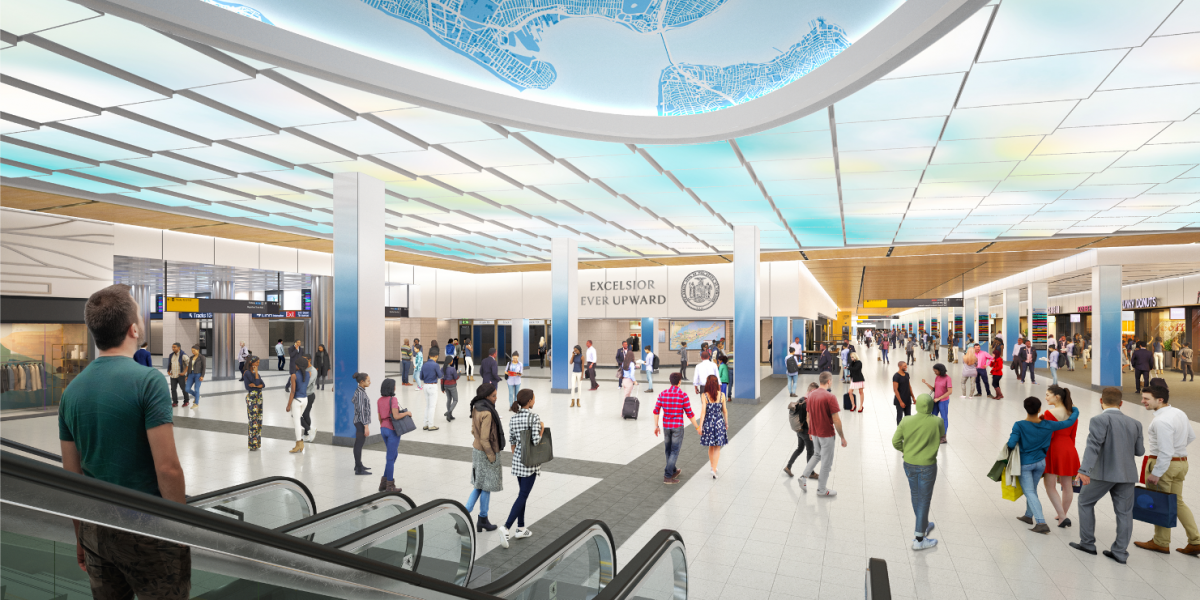 The re-envisioning of the existing Penn Station is a key part of the initiative former Gov. Andrew Cuomo announced in January 2020 to create the Empire Station Complex. This new, 21st-century transit complex on Manhattan's West Side will integrate the rebuilt existing Penn Station with an expanded, remodeled, and interconnected transportation hub to the south, and Moynihan Train Hall. It will also provide public realm improvements such as widened sidewalks, shared streets, bike parking, and more open space, and additional public transit improvements to the three subway stations near Penn Station.

Input on these alternatives will inform how the MTA, Amtrak, and NJT advance the designs. The public is invited to comment via the form below.
When an alternative is selected, the MTA, Amtrak, and NJT will work with federal partners on environmental review of the reconstruction of Penn Station as needed, in concert with ongoing public review, and also work with federal partners on an Environmental Impact Statement for Penn Expansion.